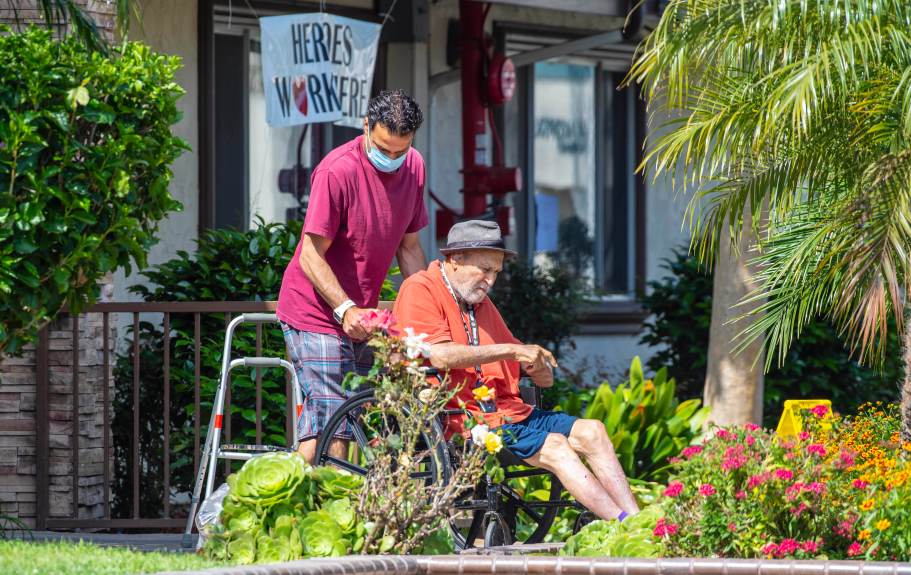 More than any other segment of society, the coronavirus preys on nursing home residents. Yet barricaded behind walls, they are the pandemic’s most invisible victims – even to their loved ones.

In an often futile mission to keep the virus at bay, long-term care facilities throughout the country have gone on lockdown. For months, many occupants’ only visual access to family has been through a window or via virtual chats.

Not only are residents separated from family members, they’re often kept away from each other, as well. A cough means they – and those they’ve been in contact with – will be whisked into isolation behind sheets of plastic. Even for the healthy, shared dining rooms and recreation centers are off limits.

“I am consumed with boredom and loneliness,” said Mick Calderon, 77, who lives at Sea Cliff Healthcare Center in Huntington Beach.

People in nursing homes once held rewarding jobs, raised children, doted on grandchildren and socialized with friends. Now they are stuck inside, unable to share a laugh with buddies over lunch.

“It’s as though I’ve been sentenced to solitary confinement,” said Calderon, a retired legal researcher.

Misty Bareno used to visit her mother a few times a week at Healthcare Center of Orange County in Buena Park. “Isolation has taken a toll on her,” Bareno said. “The teddy bear I dropped off is all she has for company.”

Now Denise Bareno, 73, depends on television as her sole entertainment. “She called me last week  crying because the cable was out in the entire facility and they couldn’t get a tech out for seven days,” her daughter said.

Stephanie Geiger’s stepfather, who lives at Alta Gardens Care Center in Garden Grove, can feel so forlorn “that he really does want to die,” she said.

“This is a man who was an aerospace engineer, who lived on his own until just a few months ago, who is still sharp mentally,” Geiger said. “Now he just sits around all by himself doing nothing.”

While visitors are banished, caregivers must continue to come and go – at the risk of spreading the virus to their own family members, or bringing it back to the facility.

Nursing home practitioners, in general, do not have the level of training hospital nurses receive, said Michael Dark, an attorney for California Advocates for Nursing Home Reform. And under the demands of coronavirus, employees are stretched thin – with greater responsibilities and, often, fewer hands.

“Many aren’t showing up, either because they’re sick or afraid of becoming sick,” Dark said. “Those still left are overworked.”

Employees toil under stressful conditions, dealing endlessly with anxious residents and their frantic families. Their workplaces have become hazard zones for which they must suit up as though going into battle.

“We pride ourselves in creating a warm, homey environment,” said DeAnn Walters, director of clinical affairs for the California Association of Health Facilities (CAHF). “Now we have to be so clinical and technical. We’re more like hospitals than nursing homes.”

Despite draconian measures to control it, the virus has marched like wildfire through nursing homes.

“About 1.3 million Americans live in nursing homes, which have shockingly high numbers of coronavirus cases and deaths,” said Nancy McPherson, California director for the AARP.

Elderly people and those with compromised immune systems are most likely to suffer serious complications of COVID-19.

Statewide, nearly half of the deaths related to the virus have been attributed to nursing homes and residential care facilities.

As of Friday, June 19, the Orange County Health Care Agency logged 1,035 confirmed cases of the coronavirus among long-term care residents and reported that 129 of the 257 deaths in the county were people living in facilities.

Lori South lived at Sea Cliff for two pivotal months: March and April. She describes a setting in which employees and residents alike are under palpable duress.

“Little things escalate into bigger things,” she said – citing an instance when a mild-mannered man, irritated that he couldn’t go down the hall for a soda, cursed at an aide.

Sea Cliff administrators did not return calls requesting comment for this story. In a previous interview for another story, Sea Cliff spokeswoman Courtney Cuomo said the facility labors to control the spread of coronavirus with N95 masks, gloves and employee temperature checks.

County officials also arranged more training in infection control for the area’s facilities as the virus began to take hold.

Employees worry about the potential for inadvertently taking the virus into the bubble of their workplace. “Nobody wants to be responsible for passing COVID-19 to another person, especially an elderly person,” said Walters of CAHF. “Can you imagine? There is a lot of anxiety.”

For those on the outside, the quarantine can feel like a impenetrable blockade. “Because in-person visits aren’t permitted, and because some facilities aren’t prioritizing virtual visitations, families are in the dark,” said McPherson of the AARP.

It’s hard these days to get a phone call through to the front desk and locate someone to answer questions, family members say. “Everything seems so hush-hush,” Bareno said.

Bareno recently resorted to Yelp – a website for reviewing businesses – to complain online about her difficulties resolving the television issues at her mother’s facility. “When they saw that, they finally responded,” she said.

Bong Flores, an infection preventionist at the nursing home, said making contact is important. “We are trying our best to call families on a daily basis.”

Herb Chatterton’s daughter Jennifer, 42, has lived at Chapman Global Medical Center Skilled Nursing Facility in Orange since suffering a brain injury as a teen. Before the lockdown, he visited throughout the week and took her to church on Sundays.

Although he has been happy with the facility, Chatterton said, its normally robust communication has waned.

“Before we were barred from entering, we got emails and calls all the time updating us on coronavirus and other things,” Chatterton said. “Now, nothing. There’s always a concern about level of care when families aren’t around to watch.”

In an email, Matt Whaley, CEO of Chapman Global Medical Center, wrote: “We understand how devastating this can be and made additional efforts to ease the burden, (such as) providing regular updates from our nursing staff as requested and holding weekly calls with families.”

Park Terrace, an assisted living facility in Rancho Santa Margarita, has tried to alleviate that sense of detachment by providing a patio where residents can converse with family members in fresh air – unobstructed, although at a distance.

“When we went into shelter-in-place, it was depressing for everyone,” said Park Terrace Executive Director Geno Koehler. “We help residents FaceTime, but it’s just not the same. Our porch gives families the opportunity for real face time.”

But many elderly people have dementia, leaving them unable to grasp their situation or why their loved ones can’t come near, Lauren Cousyn noted. Her mother-in-law checked into Silverado Newport Mesa Memory Care in Costa Mesa last fall.

When her husband tried to visit with his mother through a glass window, she “cried and cried,” Cousyn said. “She couldn’t understand why she couldn’t touch him. It was so traumatic. We found that it’s better to just Facetime.”

Tom Rezvan agonized over the loss of close contact with his father, Perry, who has dementia.

A self-described squeaky wheel, Rezvan persuaded staff at Sea Cliff to let the two sit outside, but he continued to worry about what he couldn’t see inside. On the first day of May, Rezvan gingerly helped his fragile father into his car and drove away for the last time.

“It felt like I was breaking him out of jail,” he said.

South, too, decided she could not stay any longer – telephoning her husband in tears and demanding to leave – despite the fact he was ill-equipped to meet her medical needs. The next day, she reunited with her family at their Huntington Beach house.

Not every nursing home resident enjoys a support system as strong as hers, she observed. “Imagine not having anyone to call,” South said. “It broke my heart to leave my friends behind.”

Last week, the Cousyn family also moved their loved one home. She is now in hospice care after a precipitous decline in health. “She never contracted cornonavirus, but she is dying of coronavirus,” Cousyn said. “It killed her will to live.”