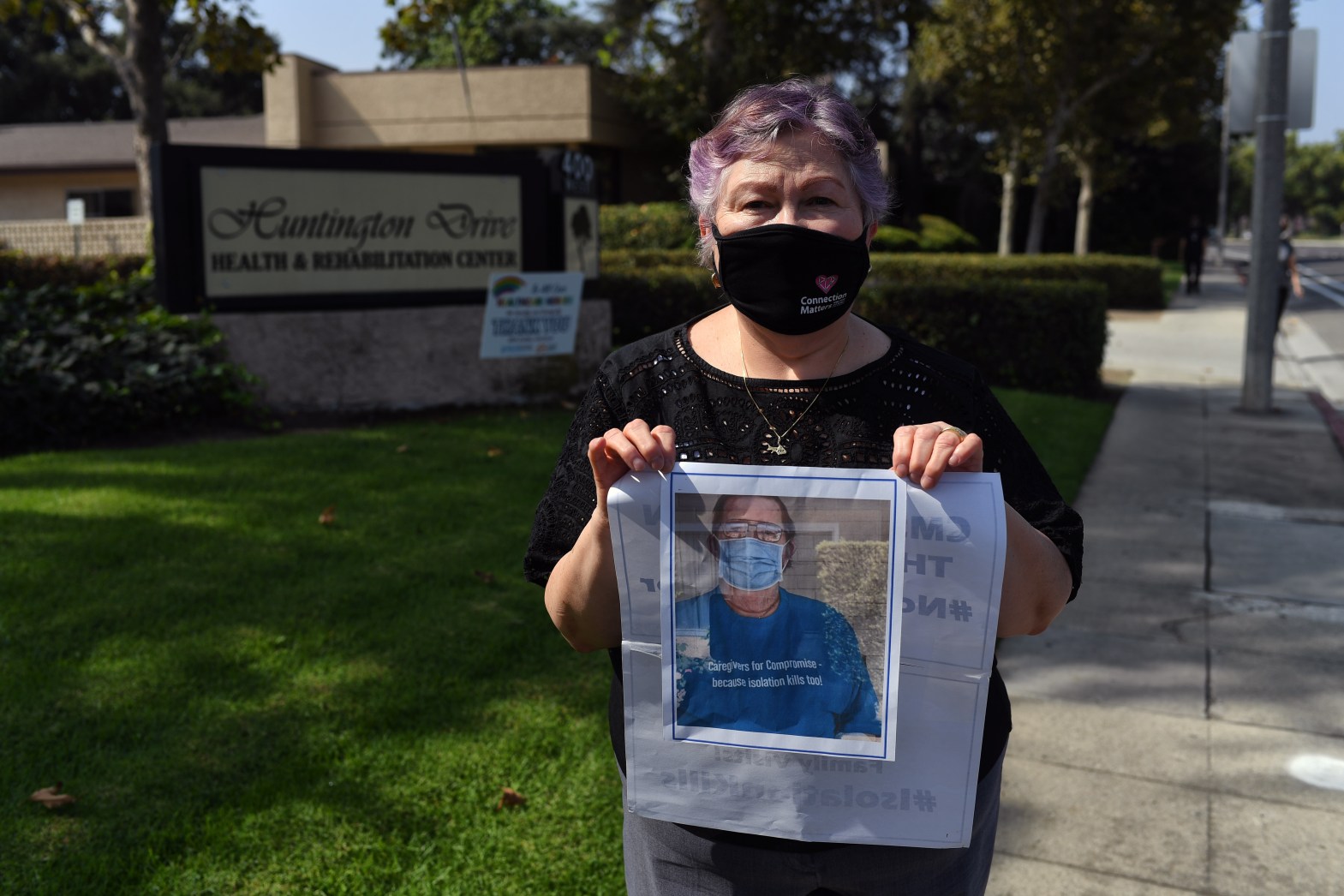 Melody Taylor Stark would usually visit her husband twice a day at his Arcadia nursing home, sharing coffee and horoscopes on weekday mornings and having dinner together in the evening.

But when the coronavirus pandemic struck, those visits came to an abrupt halt — for five months.

“I saw a quick decline emotionally, a lot of depression in someone who is normally an optimistic person,” said Stark, an electronic health records specialist. “At least a couple times or more a week, (he would say), ‘Oh, Melody, this is no way to live.’ ”

Starting in August, Huntington Drive Health and Rehabilitation Center allowed her to see her husband, Dr. William Stark, for precisely 15 minutes once a month, she said. Her first indoor visit at the facility took place on Nov. 17.

Later that day, her husband — who used a wheelchair and had several medical conditions, including post-polio syndrome and cancer — was whisked away to the hospital due to a decline in kidney function.

The retired dentist, who was 84, died five days later, just days before Thanksgiving. His causes of death were listed as a particular bacteria, pneumonia and COVID-19, for which he tested positive at the hospital, his wife said.

“The hardest part was knowing how much good quality of life was stolen from him in the last several months,” Melody Taylor Stark said the day after her husband’s death. “Before lockdown, we did a lot of things to enhance as much quality of life as possible. During isolation — because nursing homes are so poor at psychosocial and emotional wellness support — people were just left in their rooms.”

While the nursing home did some things to ramp up activities, Stark argued that it was nothing like the person-centered care that her husband needed.

The administrator of Huntington Drive Health and Rehabilitation Center, which has two stars in a five-star rating system for overall quality on Medicare’s Care Compare, declined to comment for this article. The facility’s owner also could not be reached on Friday.

Federal guidance allows local health departments to ease their original COVID-19 restrictions placed on nursing home visitors in a phased approach based on the local situation and a particular facility’s case, staffing and testing status.

But because of the high COVID positivity rate in Los Angeles, “we are under the strictest requirements” for nursing home visitation, said Molly Davies, who oversees the long-term care ombudsman program in Los Angeles County that investigates complaints from such residents.

Arguments have been made that visitors who act more as caregivers, who for example help encourage people with dementia to eat, should have more access than general visitors. Facilities are working with local public health officials to make some of these determinations, she said.

“There’s this balance that’s trying to be struck between protecting people’s health, safety and health care and giving them life,” she said.

There are also federal requirements that these visits must be supervised by staff, which can complicate matters for the facility, she said. “In the past they haven’t had to do that and we already know some places are having staffing shortages anyway,” Davies said.

Long-term care facilities aren’t hiring a staff member to coordinate and supervise visits six or seven days a week but they should, she said, adding that human contact “is incredibly healing.”

In a recent survey conducted by Altarum, a nonprofit and research consulting group, more than three-quarters of nursing home residents who responded said they felt lonelier than usual during the pandemic, while nearly two-thirds said they did not leave their rooms to socialize.

“The broader evidence in the literature, as well as our survey findings detailed in this report, suggest that social isolation has produced a devastating emotional impact on many residents — and that this has also translated into accelerated physical and mental health decline,” the report stated.

Testing and personal protective equipment must be provided to visitors and they must adhere to proper infection control measures, Wasserman said.

“We’re going to have to determine what the cost is and who is going to pay for it,” he said, adding that nursing homes “operate on a fairly narrow margin.”

Maitely Weismann, co-founder of the Essential Caregivers Coalition, is calling for the federal establishment of an essential caregiver role in congregate and long-term-care settings to safely accommodate residents during visitation bans.

The essential caregiver would be chosen by each resident and trained in emergency procedures to support residents “up close and in person,” and should have access regardless of the positivity rate in the community, she said.

‘They are not prisoners’

“The rights of residents in the name of public health are being completely swept aside,” Weismann said. “They are not prisoners.”

In assisted-living facilities, which mainly provide personal care for those in a home-like and social setting, many family members support their loved ones by helping them eat, clean their rooms, change clothes and bathe during their visits.

“We show up and do informal advocacy and oversight,” Weismann said.

Weismann’s mother is at an assisted-living facility in Los Angeles called Sunrise of Playa Vista, which now allows one-hour socially distanced outdoor and indoor visits in designated areas as often as families would like, as long as the facility can accommodate them. Initially, family members were limited to 30-minute outdoor visits once a week.

“With COVID-19 cases surging across the U.S., we remain vigilant in our efforts to protect seniors from this virus,” the facility said in a written statement. “We also recognize the need for family connections during the holidays and our team is working hard to create safe opportunities for families to celebrate.”

The nursing home operator recently sent an email to its communities mentioning the possibility of in-room visits by a resident-designated essential caregiver, up to two per resident, if the county’s positivity rate drops below 5%.

However, Sunrise of Playa Vista is not currently offering in-room visitation based on guidance from the Los Angeles County Department of Public Health and the California Department of Social Services, the facility said. The latter regulates assisted-living homes in the state.

Weismann argued that essential caregivers could be trained to follow infection control protocols and, thus, should be exempt from any positivity rate mandates.

Long-term care residents “should have the power of choice or dignity,” she said. “Right now, they’re being denied that in an overwhelming capacity.”

Meanwhile, several weeks before his death, Dr. Stark told this news group that he understands that the coronavirus “is nothing to fool around with” and was forcing major changes at his Arcadia skilled nursing home. But that didn’t make briefly seeing his wife there once a month, or the social isolation, any easier.

“I’m in essence in a cell, a room,” he said in October. “I’ve got TV and the newspapers but that’s it. … I am not happy. I don’t think anybody is truly happy.”

The story is part of a series produced by correspondent Brenda Gazzar, participating in the USC Annenberg Center for Health Journalism‘s California Fellowship.