S.F.’s largest nursing home reopens for visits after a painful winter of separation: ‘It’s been so long’ 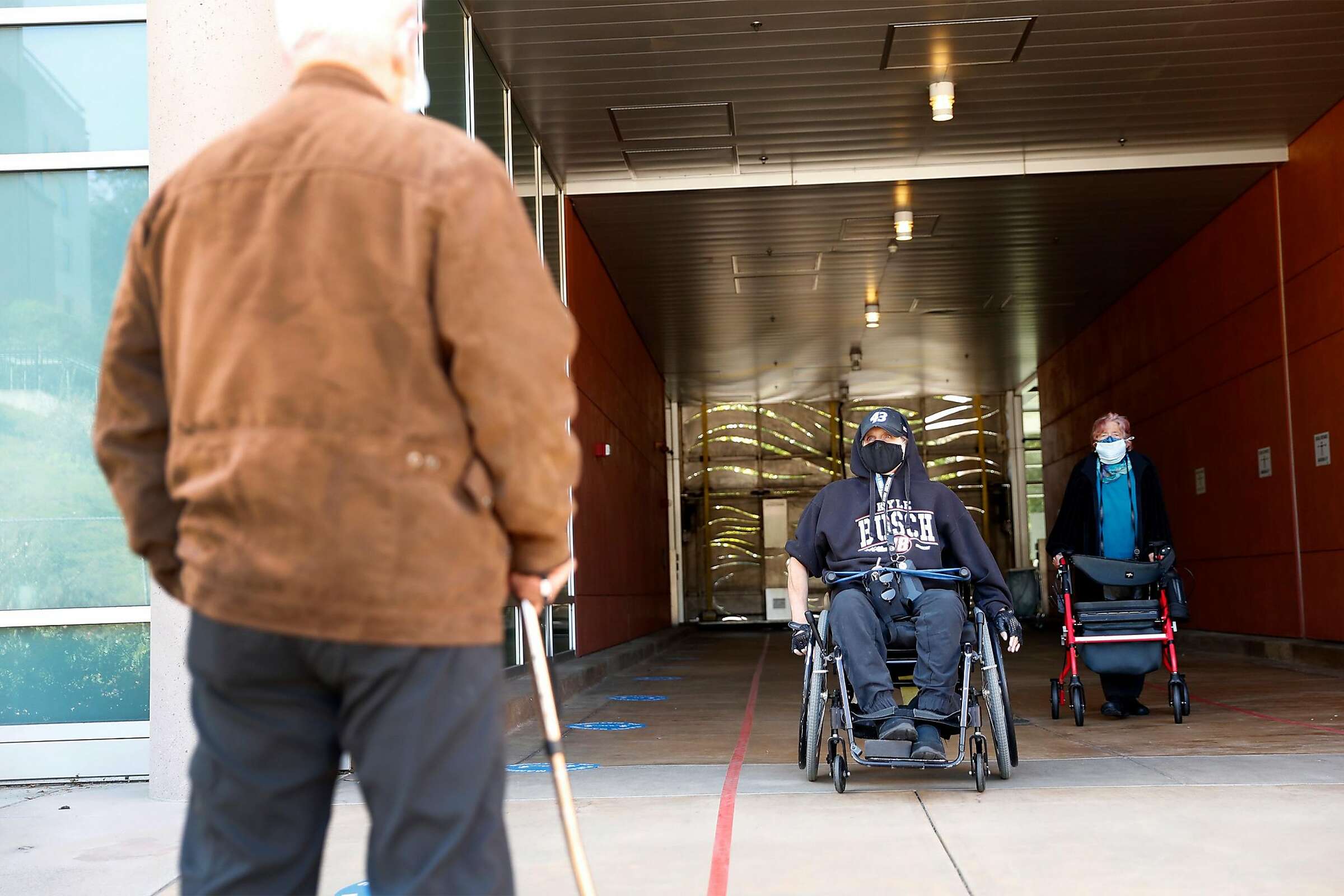 For her 79th birthday, Karen Monley got the best gift imaginable: She and her husband were finally able to visit their son — a resident at San Francisco’s Laguna Honda nursing home — after a nearly three-month lockdown.

San Francisco’s largest skilled nursing facility — home to roughly 700 people, including hundreds of frail and elderly residents — reopened Wednesday to families for outdoor visits with their loved ones. Laguna Honda had shut its doors in early December, after a regional stay-at-home order and as cases within its walls increased to 66 — the highest number reported so far. But with no cases now, Laguna Honda was ready to welcome outsiders again.

“Mom said it’s her birthday, she wants to come visit,” said David Clark, Monley’s son, outside the facility where he sat 6 feet from his parents. Clark said he was happy to be reunited with this parents.

Laguna Honda’s reopening is just the latest example of how the facility has been at the forefront of the pandemic. An outbreak hit the sprawling campus early, a harbinger of how nursing homes struggled with the virus, but Laguna Honda managed to keep cases under control. Then, as the region experienced a surge in COVID-19 cases in December, so did the facility. Now, with vaccinations underway, it’s starting a return to normalcy.

It’s difficult to overstate how important those visits are to the physical and mental health of residents, who have not only struggled with fear of the virus, but with social isolation at times, too.

“Human interaction with your loved ones and with people you care about and who care about you is huge, so we wanted to be able to return to that as soon as possible,” said Jennifer Carton Wade, the assistant hospital administrator at Laguna Honda.

Louise Aronson, a professor of medicine and geriatrics at UCSF, said isolation is “really bad” for “physical and mental health.”

“For these people in particular, they are frail, and the less activity there is, the more they decline,” she added.

San Francisco hailed Laguna Honda, which is run by the city’s Department of Public Health, as a success for its ability to fight the coronavirus and prevent deaths. In the early days of the pandemic, state and federal officials stepped in and provided training and a plan to help in case of an outbreak.

That big outbreak came in December when cases hit a high and the facility’s first three deaths were reported. Cases remained elevated in January at 53.

“December and January were very difficult for us,” said Chauncey Jackson, who runs the Environmental Services Department and is the planning lead on COVID response at the facility. “People were more scared and more nervous. We really had to go to the extra mile.”

Jackson said the facility based decisions about visits on the city’s health orders and vaccination rates.

“We wanted to make sure that residents were not only vaccinated at a high rate, but also at the same time that all the staff were prepared to do visitation again,” Jackson said.

Saed Gheith, a 45-year-old Laguna Honda resident, said the lockdown has taken a toll on him. He’s anxious to see his parents and seven siblings who live in Daly City. He is still waiting to get an appointment for them to come visit.

“It’s been so long,” he said. “They keep asking when they can come visit.”

Michael Monley, Clark’s father, said the forced separation during the pandemic has been stressful at times. The Monleys live near the hospital and would visit Clark at least twice a week for lunch before the pandemic.

“As the months have gone on, we’ve had less and less contact with people,” Michael Monley said before glancing at his son. “It’s really nice to sit here, it’s really great.”

Visits at Laguna Honda have been sporadic over the last year. In March, San Francisco barred non-essential visitors at skilled nursing facilities, but in September, outdoor, window and vehicle visitation were allowed. After the facility shut down to visitors again in December, Clark and his parents relied on daily phone calls and Zoom chats that included his sister, who lives in New York.

After learning visits would be allowed again, Michael Monley told his son to get them on the list right away.

The staff schedules six visits per day — a combination of vehicle visits and in-person outdoor gatherings either at the facility’s basketball courts or in another open space.

Visitors — who are screened for COVID symptoms — and residents must wear masks and stay 6 feet apart.

So, on Thursday, Clark and his parents — who are all vaccinated —couldn’t hug. Instead, they caught up on new movies to watch online and discussed when to expect the next round of stimulus checks. But for Karen Monley, it was the perfect birthday gift after a year of uncertainty.

“This was quite enough,” she said with a laugh.