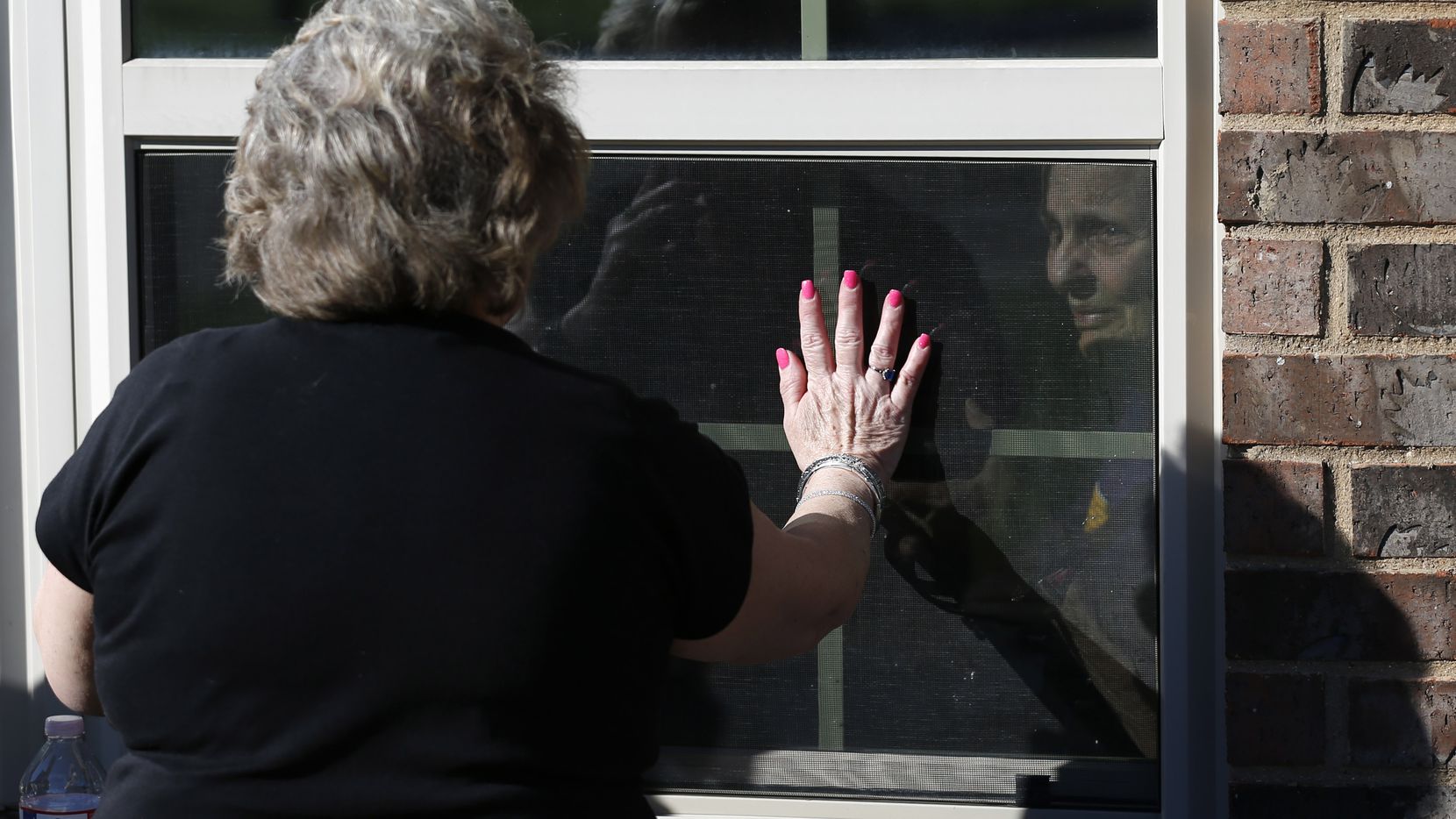 More than five months after Texas long-term care facilities closed their doors amid the spread of COVID-19, only a dozen nursing homes have met the state’s criteria to slowly begin letting visitors back in to see their loved ones.

According to records obtained by The Dallas Morning News, fewer than 30 nursing homes — out of over 1,200 statewide — applied to allow visitors as of Aug. 20. Half were denied or are still awaiting an answer from the state on that date.

One hurdle to resuming visits is the state’s requirement that staff be tested each week, nursing home insiders said. Facilities say they are facing several other challenges. Visits must be monitored and happen outside, meaning homes need sufficient staff and outdoor space where elderly residents won’t be overcome by the scorching heat.

The state has approved far more assisted living centers — more than 400 in total — to resume visits. These facilities generally have healthier residents and lower COVID-19 infection rates, the Texas health agency said, so their visiting standards are less rigorous than those at nursing homes.

Three of the approved nursing homes and 150 of the assisted living facilities are in North Texas.

State and federal health authorities say the visiting rules balance the health of residents and their emotional well-being. But families continue to worry about their loved ones’ mental health after months of separation, and some complain that the visitation requirements, while well-intentioned, won’t help residents who cannot understand or comply with the rules — or who cannot even leave their beds.

They last saw each other more than five months ago.

“Whatever mental cognition she had March 12 is gone now,” Nichols said Friday. “She just lays there.”

Nichols recently began the Facebook group Texas Caregivers for Compromise to push for greater family access to nursing homes. It has over 2,000 members.

More than half of Texas nursing homes have reported at least one coronavirus case, with nearly 22,000 residents infected during the pandemic, state data shows. Meanwhile, about 300 assisted-living centers have reported cases affecting some 2,300 residents at those facilities.

Some Dallas County facilities have been hit hard. Monticello West and Brentwood Place One in Dallas and Edgewood Rehabilitation Care Center in Mesquite reported at least 15 deaths and over 40 infections since April.

Now, 16% of the state’s nursing homes have reported recent outbreaks among residents, with only five states having higher rates, federal officials said.

Data shows that new coronavirus cases in Texas nursing homes peaked in July and have started to decline. State leaders announced in early August that it was time to begin allowing some facilities to restart visitation after months of strict quarantine — but only under strict guidelines.

Kelli Weldon, a spokeswoman with the Texas Health and Human Services Commission, said the state considered multiple factors before deciding to allow limited visitation, including outbreaks inside facilities and a declining trend of the virus’ spread in the broader community.

Weldon said the policy “requires a balance of protecting the safety of people in long-term care facilities and also allowing the ability for family, friends and others to resume visitation to provide critically needed support to their loved ones.”

Seema Verma, administrator for the Centers for Medicaid and Medicare Services, commended the state’s new visitation rules on a call with The News on Friday: “We want to do everything we can to make sure nursing home residents are safe but also have that quality of life which is critical.”

To receive approval, nursing homes must declare they have no active COVID-19 cases among residents. All staff must be COVID-free for two weeks and also must be tested weekly. Visits must take place outdoors. Approved nursing homes must attest that they have adequate staff to monitor each meeting and ensure there is no physical contact between residents and visitors.

This means no hugs or hand-holding for people separated from their families for months.

Assisted living centers, where residents are generally more independent than in nursing homes, are subject to many of the same rules. But these facilities can allow meetings indoors if a plexiglass barrier is placed between the resident and visitor. They also don’t need to perform weekly staff testing to be eligible to restart visitations.

One South Texas nursing home was turned down for failing to declare that it was testing regularly. Two in Bexar County were refused because of a local ordinance banning both indoor and outdoor visits to long-term care facilities. The San Antonio Express-News reports this issue should be cleared up now, but it is unclear whether these homes will apply a second time.

Just 12 homes were approved. All but one, a nursing home in Clarendon, had prior coronavirus infections among staff or residents, federal data shows. The approval list includes three nursing homes in North Texas: Healthcare Center at the Forum at Park Lane and Presbyterian Village North Special Care Center in North Dallas, and Arbrook Plaza in Arlington.

Among the more than 150 assisted living facilities in Collin, Dallas and Tarrant counties that were approved to reopen is Monticello West, which has reported 21 deaths and nearly 50 infections to the county since April. It has not reported an active coronavirus case in over 30 days.

Weldon said the state will visit approved facilities and cite those found to be out of compliance.

Charlene Harrington, a professor emeritus at the University of California San Francisco, supports reopening long-term care facilities. But she questioned why assisted living facilities would be subject to different rules.

“The testing of the staff should be at least weekly both in nursing homes and assisted living,” said Harrington, who has studied the long-term care industry for decades. “There should be the same procedures. There’s really no difference.”

The biggest hurdle to reopening is testing, industry representatives said. Between the availability and costs, nursing homes are struggling to meet the state’s requirement to test staff weekly.

“The barriers are just too high,” said George Linial, president and CEO of LeadingAge Texas, which represents nonprofits that work with the elderly.

Focused Post Acute Care Partners operates 31 nursing homes across Texas, two of which have been approved for visits. The company is spending about $300,000 a week to test staff across all the facilities, chief clinical officer Becky Anderson said.

The state and federal governments are providing some aid, but not all nursing homes have received it yet. Texas is working with Omnicare, a CVS Health company, to provide some rapid COVID-19 testing in nursing and assisted living facilities.

The U.S. Department of Health and Human Services is sending rapid test machines to nursing homes across the country, and hundreds in Texas have already received one, industry representatives said. But the machines come with enough supplies to test only a few hundred people. Finding more to buy has proved difficult, Anderson said.

Verma, the CMS administrator, called this a temporary problem. Suppliers are manufacturing more test kits, which she said “should be right around the corner.”

“Testing is key to this,” she said. “We’re encouraging nursing homes to find a path forward and find a way to have safe visitation.”

The summer heat is a deterrent for facilities thinking about permitting visits.

“I hear from our members — they don’t want to risk putting their residents out in this heat,” Linial said.

Anderson said one of her company’s nursing homes with visitation, in Baytown, is scheduling meetings in the morning and evening when the temperatures cool off. It also is providing hydration stations and shaded meeting spots. The second location, in Brenham, will begin next week.

“It’s challenging because the population that we serve, they can’t tolerate the heat for very long,” she said.

For many families and advocates, the state’s rules are well-meaning but far too tough.

“This is too far,” said Patty Ducayet, the state’s independent long-term care ombudsman, describing the new visitation rules. She would prefer all facilities be allowed to reopen, even those with active COVID-19 cases. Residents who are not infected should still be allowed to see their loved ones, Ducayet said, and should not be penalized because they live in a home where others are sick.

Ideally, she added, long-term care facilities should be given more straightforward and “measurable” goals — like showing they don’t have a history of infection control violations — and then they should be required — not just allowed — to restart visitation. Making everything contingent on testing is “an obvious and huge barrier” to reopening.

“It is probably well-intentioned as a policy but it feels punitive to the residents,” Ducayet said. “I feel we need different rules here. There are more questions than there are answers for a lot of us.”

In the absence of clarity, she said, nursing homes are interpreting the rules to the “extreme.”

Family members are often caregivers, doing things like cleaning dentures or brushing hair, said Nichols, the woman whose mother is in a Kaufman County nursing home. Their absence is shifting those tasks to employees, or they are not being done at all.

“There’s been this huge vacuum,” Nichols said. “I don’t fault them at all if they don’t apply for this because it’s just another way to tax their already overburdened staff.”