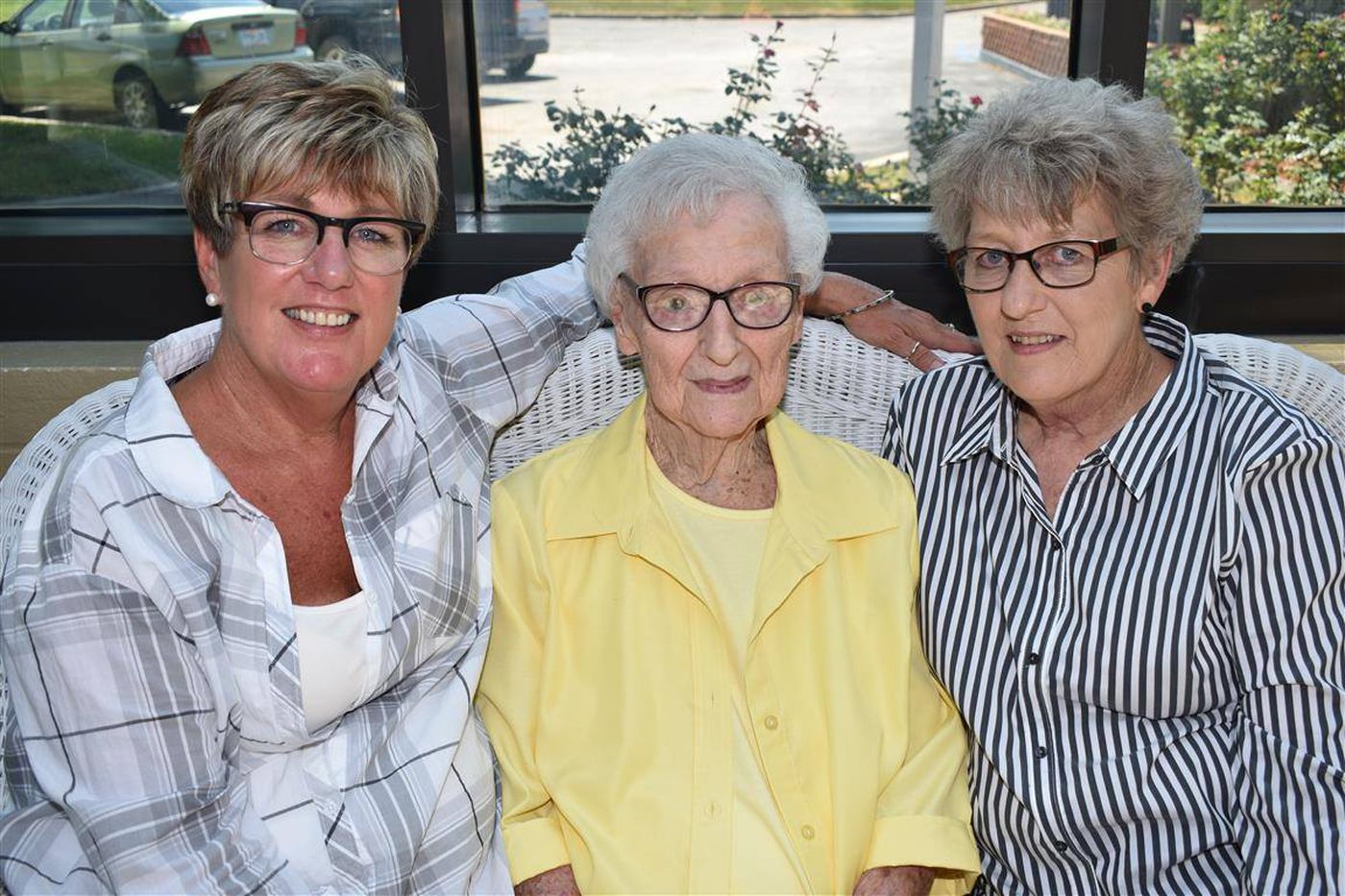 (InvestigateTV) – For seven months, sisters Jill Starke and Carla Helmig repeated to their mother by phone or through a window at her nursing home, “We’ll see you soon.”

They knew it was a lie.

But they wanted their mother, Betty Virginia Starke, to stay strong as COVID-19 locked them out of the Missouri nursing home where she lived.

“Every time we talked to her, we were lying to her, ‘We are going to get to see ya. It’s not going to be long,’” Jill Starke said. “We knew it wasn’t going to happen.”

Across the country, families have struggled to stay connected to the 1.3 million people who live in nursing homes as the deadly virus put their loved ones in lock down. While COVID-19 has claimed an estimated 50,000 nursing home residents, isolation and loneliness have taken a toll on uncounted others.

Although most states are now easing restrictions on visitations, Starke and Helmig were unable to visit Rest Haven Convalescent and Retirement Home in Sedalia, Missouri for reasons that they say weren’t explained to them. Missouri now allows nursing homes to decide for themselves if it is safe for outdoor visitation, according to AARP, which tracks nursing home restrictions.

During the seven months of isolation, the sisters noticed a decline in their 92-year-old mother’s willingness to live.

“It was devastating watching that,” Helmig said. “Listening to her phone calls [saying], ‘If I can’t see you, I don’t want to be here’.”

Starke had her last in-person visit with her mother the second week of March. She tried to pacify her mother with empty promises.

Helmig finally was able to visit her mother on Sept. 21 after the facility began its first day of outdoor visitation.

“She never opened her eyes that day,” Helmig said.

Betty Starke passed away the next day.

Visitations resume in many states, but challenges remain

Seven months into the pandemic, nursing homes have yet to fully open their doors to visitors.

As of Oct. 6, some states allowed only end-of-life visits, according to AARP. Three of those states – Hawaii, Nevada, and Utah – had not announced plans to change those rules. But governors in Alaska, Georgia, Pennsylvania, and Washington have said they have phased-in plans to allow visits in the future.

The remaining states have a hodge-podge of rules with some states such as Ohio, Michigan, and South Carolina allowing only outdoor visits. Indoor visits are restricted to terminal patients.

In September, the Louisiana state health officer issued an order that nursing facilities follow new guidance from the CDC to allow visits with certain provisions.

The Centers for Medicare and Medicaid Services issued that new guidance to set policy on when and how visitation can happen that is tied to counties’ positivity rates. If counties are experiencing a large outbreak, visitations are not allowed. If there is a relatively low rate of infection, visits are permitted based on rules established by each nursing home.

The new rules also require that nursing homes have adequate PPE and staffing in order to have family visitation.

The new rules also say that nursing homes that ban visitation without just cause can face sanctions and fines from CMS.

But even so, families continue to struggle to see their loved ones. A Facebook group with more than 13,000 members complains about the lack of access to meaningful visitation.

Finding the right balance can be difficult, said Mark Parkinson, the executive director of the American Health Care Association, which lobbies on behalf of nursing homes.

“We know that if our residents get COVID as many as 20% of them will die and others will be seriously ill,” Parkinson said. “We also know our residents really need their loved ones. They’re frail. They’re old, and they’re lonely.”

Many families like Betty Starke’s say their loved ones where spared from the deadly virus but died of loneliness.

Dr. Michael Wasserman, president of the California Association of Long-Term Care Medicine, said that isolation can be detrimental to the well-being of residents in these facilities.

“Even before COVID, we knew that social isolation really has a negative effect on older adults. It can cause depression, it can cause weight loss, other morbidities. It really isn’t good for older adults,” Wasserman said.

Some states such as Indiana, Minnesota and South Dakota have “essential caregiver” policies for visitations at facilities at a low risk of a COVID-19 outbreak. Essential caregivers generally are family members or guardians who have been intimately involved with the care of resident even before the pandemic.

But Wasserman believes visitations are a vital resident’s right and they should be part of the decision process in visitation restrictions.

“I think in the early stages of this pandemic, it was very easy to want to protect the residents by keeping visitors out who might bring COVID into their facility, but at the same time, they are human beings like everyone else, they have a right to see their families, friends, and others,” Wasserman said.

Parkinson agrees that visitation should be allowed outdoors everywhere in the U.S. and indoors in areas where COVID-19 rates are low. But he said it was the right call to lockdown nursing homes seven months ago.

“You have to err … on the side of letting less people inside,” Parkinson said.

Betty Starke lived at Rest Haven for nearly than three years. Her daughters visited her daily.

Then then the pandemic hit, and the sisters could only visit through the window outside her window.

Those visits proved pointless. Their mother was hard of hearing and blind. She also had to wear a mask, which made communication all that more difficult.

The sisters once asked aides to remove her mask so they could she her smile. They refused.

Jill Starke applied for applied for a job doing laundry at the facility, hoping that would give her the chance her mother. But the job didn’t materialize.

Frustrated by the inability to see their mother and the lack of information about her condition, the sisters filed a complaint with the state health department about Rest Haven and transferred her to a different nursing home.

“I knew Tipton [Oak Manor] was doing outside visits whereas Sedalia told me it could be a year or more till I got to see my mom again,” Helmig said. “I was hoping for anything to see her.”

When contacted by phone to talk about the visitation policies and Betty Starke’s care, Rest Haven’s administrator Georgann Foster told InvestigateTV that she didn’t have time to comment.

After Betty Starke was moved to Tipton Oak Manor on Aug. 31, the sisters learned that their mother had developed blood clots in her legs and had lost 20 pounds.

They were unaware of these serious issues until the move.

“Sedalia many times never answered our calls or said that the cordless phone was dead, to call later,” Jill Starke said.

At the Sedalia nursing home, the only calls the sisters said they got from the facility were an instance where their mother had spilled hot coffee on her lap and the facility was using mustard as a home remedy because there was no medicine for burns.

Most of the conversations the sisters had with their mother were through the phone. She mostly talked about missing her family.

“If only I could have got in my daily visits before lockdown, I knew as soon as I looked at her if something was wrong any day,” Helmig said. “If I only knew, we would have tried to get help.”

Starke said this problem is bigger than just their mom’s case.

“Our seniors deserve better than this, more respect, end of life care, overall care,” she said. “And love of family, especially during a pandemic.”

Betty Starke passed away the next day after her first outdoor visitation at Tipton Oak Manor. The nursing home administrator declined to comment.

Like Mrs. Starke’s daughters, Chelsea Dagen has watched her father struggle without visitors.”

“This place seems like a prison. You can’t come in. I can’t go out,” Milt Nelson wrote in a handwritten letter to his daughter on Oct. 3.

Dagen’s father hasn’t had any physical touch from the family since the Avera Brady Health and Rehab in Mitchell, South Dakota went on lockdown.

Dagen, who has been visiting her father at the facility for two years, said that she has seen a great decline in his health since visitation was banned.

“When I see him through a glass window or am given an opportunity to see him through plexiglass, all I am reminded of is going to a zoo to see an animal,” Dagen said, a former medical sonographer. “I am sure this is exactly how he feels, too.”

Dagen’s father was diagnosed with Parkinson’s disease about six years ago. She said that her father used to call her on the phone when the lockdown first happened but has since stopped calling.

To further complicate the matter, the nursing home wouldn’t allow window or video visits through a phone without a 24-hour notice, Dagen said.

“I am constantly reminded that they have them in lockdown to protect them from this deadly virus as they are more vulnerable to it,” Dagen said. “But what those who have made such strict guidelines, rules, and policies fail to open their eyes to, is the fact that the elderly are also at a higher risk to depression.”

Because Dagen lives in a COVID-19 hot zone, nursing homes have not allowed for any form of visitation, even those that fall under “essential caregivers.”

“Not being able to physically be with my father without a two-inch-thick piece of glass between us and then having such a strict set of rules at the facility he resides in has taken a toll on me mentally as well,” Dagen said. “The guilt I feel if we have prior plans and cannot take our children to see him on the only available day we can visit is tough to swallow.”

CMS reported that Avera Brady Health and Rehab has two confirmed COVID-19 resident cases and 10 suspected as of Sept. 20. But South Dakota is seeing a surge of cases across the state.

Avera Brady Health and Rehab did not respond to requests for comment.

Despite the challenges and heartbreak, families continue to fight. They call their governors, local lawmakers and health departments.

For Dagen and her family, the fight continues to see her father in person again.

Her father, too, is fighting to stay strong. In the letter to his daughters, Nelson wrote, “You Chels are a lot like me stubborn and don’t give up.”

Editor’s Note: This story has been corrected from a previous version to accurately reflect the current visitation policies in the state of Louisiana. The original version incorrectly stated that Louisiana had no plans to change its visitation policy.