Elderly, Vaccinated and Still Lonely and Locked Inside 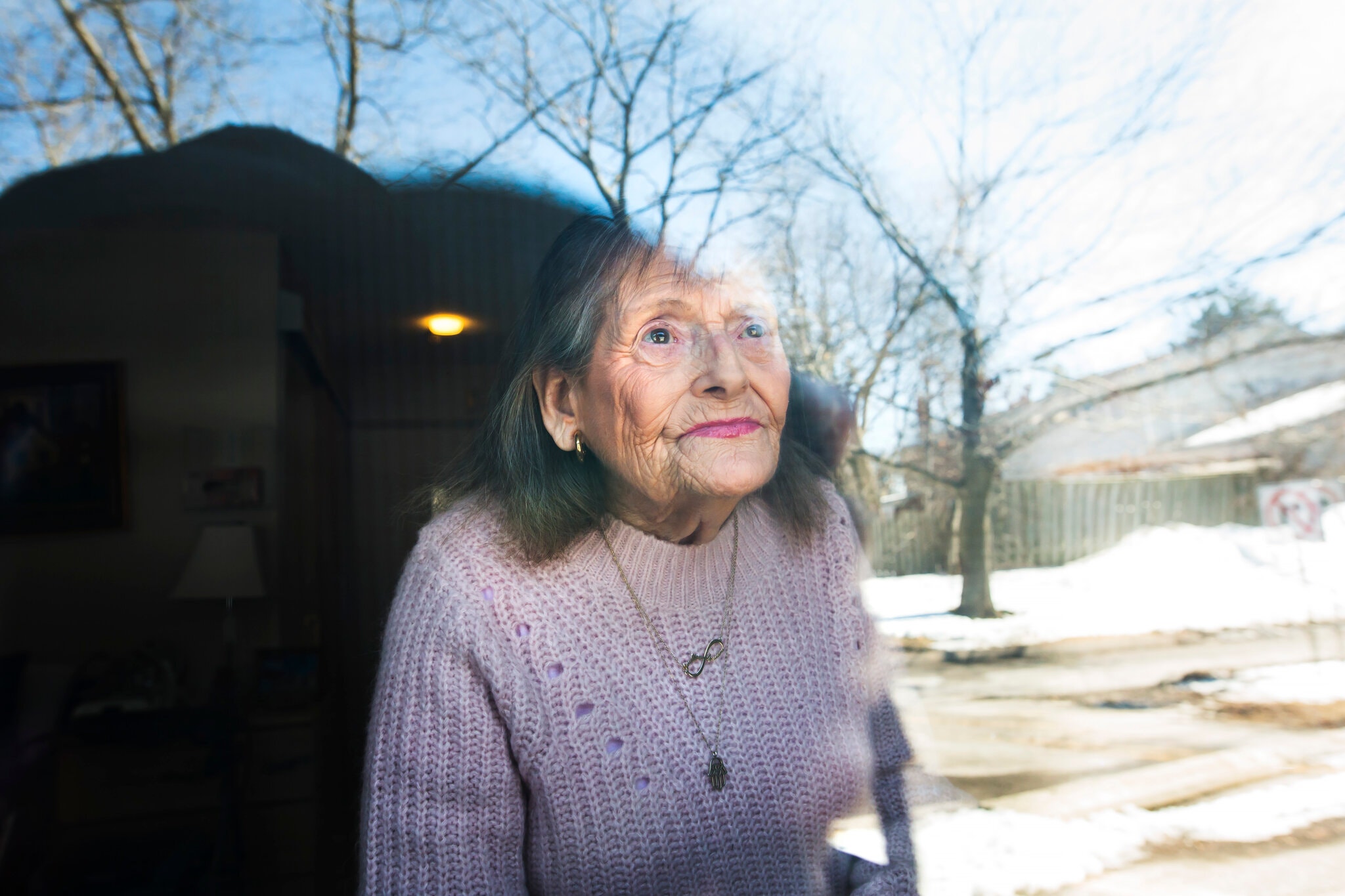 TORONTO — Devora Greenspon is among the lucky ones. She is one of the 1.4 percent of Canadians who has received two shots of a coronavirus vaccine. So have 90 percent of the residents in her nursing home.

How has it changed her life?

“It’s like it never happened,” says Ms. Greenspon, 88, who is still sequestered mostly in her room. Her walks have been confined to the corridor; she has not been allowed to leave the center for nonmedical reasons since October.

Long-term care homes, as they are called in Canada, were prioritized for the first precious doses of vaccines, to few objections — they were ground zero for the pandemic’s cruel ravage. Around 66 percent of the country’s terminal Covid-19 victims lived in nursing homes, among the highest rates in the world.

But while the vaccines have given the majority of nursing-home residents protection from death by the virus, so far they have not offered more life. Some residents have compared their lives to those of prisoners and caged animals.

Most places around the country have policies that allow visits from only one or two designated caregivers, but these measures aren’t evenly carried out. And in several cities, including Toronto and Montreal, residents are not allowed to leave the property to walk to a pharmacy or enjoy the simple pleasure of a stroll down the street.

All this has left some residents frustrated, baffled and wondering: What, exactly, am I being kept alive for?

“I have so many things I want to do, I can’t do them,” said Ms. Greenspon, a great-grandmother and retired teacher. “I may never get to do them. I may die before the pandemic is over.”

Officials at provincial and territorial health care ministries around the country, which oversee health care, offer many reasons for not relaxing restrictions: concerns about emerging variants of the virus, the lack of research on the vaccine’s effectiveness in preventing transmission and, in some cases, the high infection rates in the surrounding community.

“We need to better understand the effectiveness of the vaccines in preventing transmission, including variant transmission, before we can safely alter visitor policies,” said Tom McMillan, an Alberta health official.

He and others say they are waiting for scientific assurance that it is safe to ease regulations.

“Nobody wants to be the person that made the policy change that will be linked to big outbreaks and increase in death,” explained Isobel MacKenzie, head of British Columbia’s Office of the Seniors Advocate.

At the same time, social distancing rules and outbreaks in the homes have made group programming so rare, many people pass entire days in their rooms, according to Laura Tamblyn Watts, chief executive of CanAge, a seniors’ advocacy organization.

In the United States, some states have loosened restrictions as cases have dropped, allowing nursing homes to hold group activities like game night or choir practice. And some homes are permitting indoor visits under U.S. federal guidelines put in place in Septemberthat allow them if a home has been virus-free for 14 days, and county positivity rates are below 10 percent, regardless of the home’s vaccination rate.

But elsewhere, homes are about to reach a full year of being closed to visitors, despite the plummeting of coronavirus cases.

AARP and other advocacy organizations have called on the U.S. government to ease visitation guidelines as vaccines are rolled out innursing homes. Many note that with vaccinations, the likelihood of residents contracting and dying from Covid-19 is lower, but the harm to residents from social isolation continues unabated.

Ms. MacKenzie noted that the extended periods of isolation are having detrimental effects on residents’ health in Canada as well.

A large survey of nursing-homes residents and their families by Ms. MacKenzie’s office found the majority reported a marked decline in cognitive function and emotional well-being, and almost half reported their physical functioning had worsened. The survey also found that the proportion of residents on antipsychotic medication — traditionally prescribed to manage behaviors like agitation related to dementia — had increased by 7 percent over six months.

The question of how to care for the country’s senior population during a pandemic isn’t unique to Canada and the United States. Many nursing homes around the world banned visits as the coronavirus arrived around a year ago. Soon after, geriatricians sounded the alarm about the rapid decline in health and well-being of residents, triggering a debate about the balance between protection and quality of life, as well as the rights and autonomy of residents. As a result, many jurisdictions reintroduced some sort of visitor policy, as the first wave subsided.

Many are calling for a similar discussion to happen again in Canada.

“If we really don’t allow people more civil and social liberty, and allow them to meaningfully engage in social activities in some way, these people are going to give up, as many of them have already done,” said Dr. Nathan Stall, a geriatrician at Toronto’s Mount Sinai Hospital.

Betty Hicks, 82, broke her hip a couple months before her nursing home went into lockdown and she never regained her ability to walk, says her daughter Marla Wilson. Without the regular visits from her large family, the mother of eight deteriorated quickly, losing nearly 20 pounds and the ability to even pick up a phone, her daughter says.

Now that Ms. Hicks has been vaccinated, like everyone elsein her nursing home, the argument that she’s locked up for her own safety seems painfully weak, her daughter says.

While overprotective government regulations have prevented long-term care homes from adjusting their restrictions, they are only partially responsible, said Dr. Samir Sinha, co-chair of the National Institute on Ageing and director of geriatrics at Toronto’s Sinai Health System and University Health Network.

Many facilities have been so focused on preventing outbreaks that they’ve been unwilling to develop creative ways of keeping their residents mentally and physically stimulated, he said.

“The majority of nursing homes across the country have found an excuse to not do something,” he said. “You even have these homes who are marketing it, ‘We’re going above and beyond to keep you safe.’ We translate that to mean, ‘We are locking you in your room for good.’ They are actually violating people’s human rights.”

And for many residents, Dr. Sinha pointed out, time is running out: The average stay in a Canadian nursing home, to put it gingerly, is just two years.

“I’d like to take them on a bus to Niagara Falls, or anywhere, even if we can’t get off the bus. When can we do that?” said Sue Graham-Nutter, the head of two nursing homes in Toronto where 98 percent of residents have been vaccinated. She is haunted by last spring’s outbreak that killed many of her residents, but she worries many more will die before they are afforded some basic joy.

“They want to go and hang out with their friends,” said Ms. Graham-Nutter, the chief executive of Rekai Centres. “When can we do that?”

Lawyers say the rules restricting residents from leaving breach rights laid out in the Canadian Charter of Rights and Freedoms. “Long-term care residents should be able to come and go like everybody else,” said Jane Meadus, a lawyer at the Advocacy Centre for the Elderly, a legal clinic for seniors. “Does the fact you live in long-term care give you less charter rights?”

Few of her clients are willing to challenge their home’s restrictions, however.

“They are afraid the home will somehow retaliate, or try to remove them from the home,” said Ms. Meadus. “We are talking about institutions that have a lot of power over a very vulnerable population.”

Jonathan Marchand is one exception. Last summer, he slipped out of his care home near Quebec City and moved into a makeshift cage erected near the provincial legislature, to stage a protest. Mr. Marchand, a 44-year-old network engineer, suffers from muscular dystrophy and requires a ventilator to breathe. For years, he’s fought to leave the institution and spend the government money to hire his own caregivers at home.

The pandemic gave him another powerful argument. After five nights sleeping in his motorized wheelchair and on a cot, he returned to the facility, with a government promise to work on a pilot project for community living.

Since then, he has not been allowed to leave the property except for medical reasons, he says. While he calls the rules unjust and unfair, he understands why they are there — because of the devastation an outbreak from variants could wreak.

“Long-term carefacilities were the first things to close down; they will be the last thing to open up,” he said. “I think they will be very cautious in opening up, and I can’t blame them for it.”

Still, some people have decided not to wait for the rules to change, but to relish the small joys vaccination provides.

Suzanne Charest rushed to an Ottawa hospital last month after being notified by her father’s nursing home that he had suffered what seemed like another heart attack. He was in so much pain, she said, he talked frantically through the night, as if it might be their last time together. Thankfully, it was a false alarm.

The next day, after he was back in the nursing home, Ms. Charest, who like her father has been vaccinated, did something she hadn’t done in almost a year.