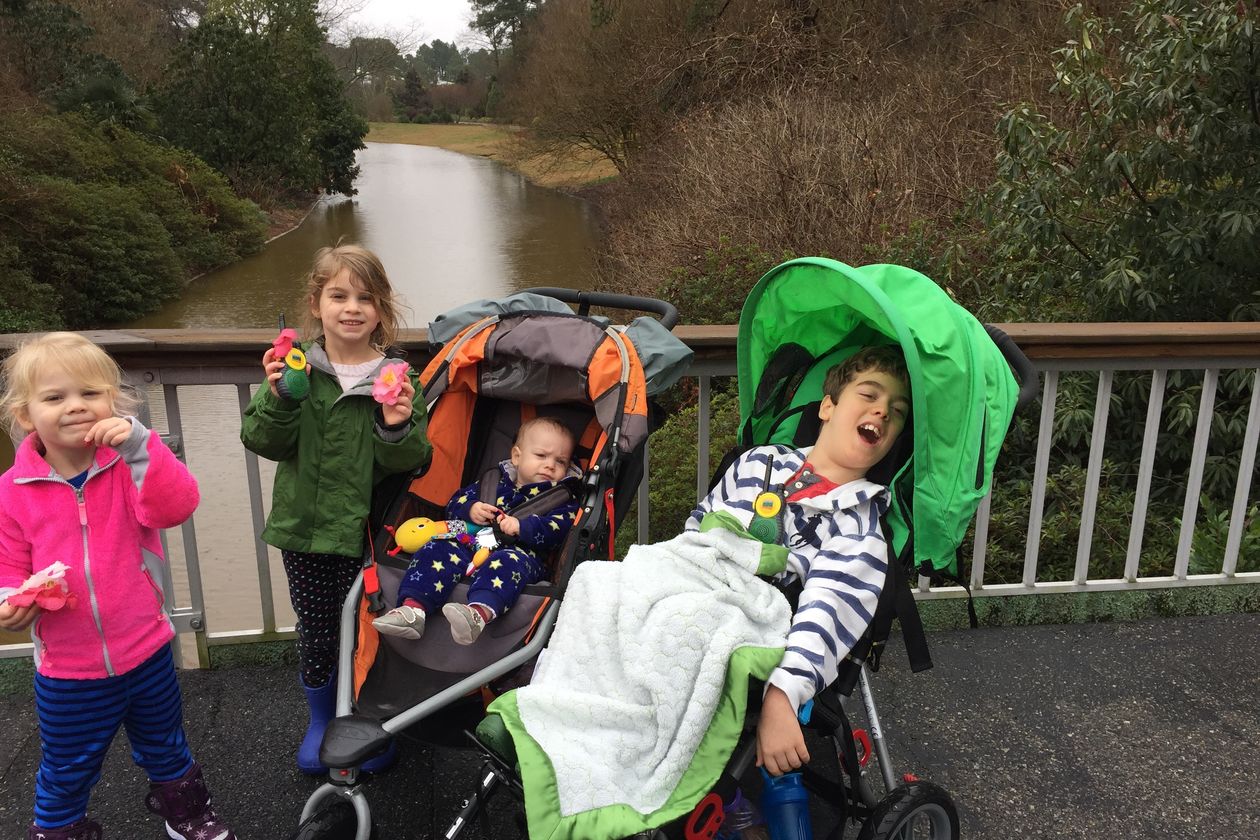 Crystal Ton won’t take no for an answer.

For three months, the Virginia Beach, Va., mother of four has been fighting to see her 13-year-old son, Jackson Mitzner. Jackson has complex cerebral palsy, among other conditions, and lives in a pediatric long-term care facility, which barred all visitors amid Covid-19’s spread in late March. In dozens of emails, phone calls, and in-person meetings, Ton has appealed to the facility, state regulators, Congressional representatives, and disability rights lawyers. So far, she says, she has received no meaningful response.

In early June, a few days before his birthday, Jackson sent his mother a message that could have come from any exhausted American teenager. He said he wanted to “come home and chill.” His message was transmitted via an eye-gaze communication device and relayed over FaceTime. “I thought it couldn’t get any worse,” Ton wrote on Facebook on June 7, Jackson’s birthday. “I was wrong. I don’t know what to tell him.”

“This is inhumane and unnecessary. I am over this shit,” Ton wrote. “Happy Birthday, Love. I wish I could hold your hand and tell you some good news, but I can’t. I’m sorry that people in power think that isolating you from your mother is somehow protecting you. They are wrong.”

Although a handful of states are now allowing nursing homes to reopen to visitors, most of the more than two million U.S. long-term care facility residents remain on lockdown, as they have been since mid-March. Thus far, most state and federal guidance on visiting restrictions “has been very one-size-fits-all,” says Nicole Jorwic, senior director of public policy at the Arc of the United States, an advocacy group for people with intellectual and developmental disabilities. Parents of children in pediatric facilities, relatives of intellectually and developmentally disabled adults, and families of older residents with dementia are all generally told the same thing: Keep out.

For families who previously visited daily—or even multiple times a day—the visiting restrictions have all the nuance of a cinder-block wall. “All visitors are not equal,” says George Mitzner, Jackson’s father. “The pizza man does not equal a parent.”

The restrictions leave children and other vulnerable residents isolated and detract from essential care and oversight, resident advocates say. Families weren’t just saying hello but “making sure residents had nutrition and hydration,” says Richard Mollot, executive director of the Long Term Care Community Coalition. Given proper protective gear, infection-control protocols, and screening, they would likely save lives—not endanger them, families and advocates say.

Even as some states lift restrictions, there are no clear rules directing providers to reopen their buildings, and some have little incentive to do so, resident advocates say. Federal and state governments have generally offered only reopening guidelines, not mandates, and that guidance sometimes conflicts with state and local emergency declarations, says Mike Dark, staff attorney at California Advocates for Nursing Home Reform. So long as regulators give facilities leeway to keep visitors out, he says, many “will take that permission,” because the qualities that make visitors so essential for long-term care residents can also make them pesky for facilities. Visitors “find things that are wrong—infections, feeding problems, soiled linens—and they’re the ones to point out these problems to administration,” he says.

Facilities say the visiting restrictions protect vulnerable long-term care residents from the virus and that they are doing all they can to keep residents safe while maintaining family connections. “This is no one’s first choice, and we all look forward to opening visitation when we can do so without putting those we serve at increased risk,” St. Mary’s Home, the Norfolk, Va., facility that houses Jackson Mitzner, said in a statement. St. Mary’s has had no Covid cases, the facility said, which is “directly attributable to the overwhelming support of our staff and families to our plan and their adherence to the procedures we put into place.”

In facilities nationwide, however, banning visitors hasn’t kept residents safe. The virus found its way into facilities despite the lockdowns, in many cases carried by health-care workers. As of mid-June, more than 50,000 long-term care facility residents and staff have died of Covid, accounting for at least 40% of the total U.S. death toll, according to a Wall Street Journal analysis. Some pediatric facilities have had significant outbreaks, but regulators say they don’t know the scale of the problem because they don’t separately track these facilities.

There are thousands of other families like Jackson Mitzner’s, but many “worry that if they speak out loudly about their concerns, staff or management may not look kindly on that,” Jorwic says. “This concern is larger than the voices that are willing to come forward.”

Ton and Mitzner could hardly be better prepared for this fight. One of Ton’s two master’s degrees is in public health, and Mitzner is a clinical psychologist. Having lived in several different states since Jackson’s birth, they have years of experience navigating various state Medicaid systems as they tried to get coverage for his care.

When the family moved to Virginia Beach six years ago, Jackson moved into St. Mary’s, a nonprofit facility that houses roughly 90 children and a dozen adults with disabilities. It was no longer possible to care for him at home, Ton says, largely because they couldn’t get insurance coverage for in-home nursing care.

St. Mary’s generally provides high-quality care, Ton and Mitzner say. Early in the pandemic, Ton organized a fundraiser to feed the St. Mary’s staff, calling them “magical, dedicated people.” But Ton and Mitzner also say their presence in the facility has always been essential to ensure Jackson’s safety and well-being. Before the lockdown, they were both there daily, doing everything from brushing their son’s teeth to training staff members on how to interact with Jackson, who is nonverbal, fed through a gastronomy tube, and has limited mobility.

Along the way, they learned plenty about the dangers of infection in the facility and the need to constantly monitor their son’s care. Like many facilities across the country, St. Mary’s has struggled with understaffing, medication errors, and other issues, according to inspection reports. Last May, Jackson was hospitalized and nearly died from a virus acquired from a staff member who also worked in an adult facility, Ton says. The hospital found that he was malnourished, she says, a problem that was ultimately traced to an improperly calibrated food pump. A health inspection completed the following month found that St. Mary’s had multiple nursing staff members who weren’t eligible to practice nursing and that staff had mixed up residents’ food bags and made medication mistakes.

St. Mary’s said in a statement that it doesn’t discuss information related to individual residents but that it is “committed to providing excellent care and rapidly respond to any areas of improvement including those received during our various inspections, implementing policies and procedures to strengthen our efforts continuously.”

By early this year, Jackson had bounced back from the hospitalization, Ton says. Then the pandemic struck, and a flurry of confusing and conflicting restrictions gradually cut him off from his family.

On March 12, St. Mary’s restricted visitation to immediate family members and guardians and said that those visits would have to take place in one of several designated visiting rooms, according to a letter sent to families. The policy concerned Ton and Mitzner, in part because they feared infection in the high-traffic visiting rooms. But the next day, an even more troubling edict emerged from the Centers for Medicare and Medicaid Services. Nursing homes should restrict all visitation, CMS said, with very limited exceptions such as end of life. St. Mary’s, which isn’t technically a nursing home but is regulated as an intermediate-care facility, wasn’t required to adhere to the guidelines. But across the country, many facilities of all types immediately locked down.

Fearful that her access to Jackson could be cut off completely at any moment, Ton started raising her concerns with every authority she could think of, while also caring for her two-, four-, and six-year-old daughters at home. She got nowhere.

On March 30, St. Mary’s issued the new policy that Ton and Mitzner had been dreading: Effective immediately, all visitation was suspended. Even window visits were discouraged. “Please know we recognize how devastating this situation will be,” the facility wrote to families. “This difficult decision is being made out of the necessity to protect those we serve to the best of our ability and preserve resources.”

St. Mary’s offered to schedule video calls. Though she’s doing the calls, FaceTime can be “confusing and scary” for children with disabilities, Ton says.

Across the country, meanwhile, it became clear that Covid was causing havoc in some other pediatric facilities. At Willow Springs Center, a children’s mental health facility in Reno, Nev., health inspectors in early April found overwhelmed workers with no time to clean a unit housing Covid-positive patients, and children chanting “let us be free” and smashing ceiling tiles, leaving broken tile and debris all over the floor. The facility had 41 Covid cases among the residents and 29 among staff, including one staff death, according to the Nevada Department of Health and Human Services.

A Willow Springs spokesperson pointed to a notice on the facility’s website, which says it is now a “Covid-19 recovered facility” and no patients had severe symptoms. “We have implemented all applicable safety measures advised by the CDC and NV Health Department,” the notice says.

In mid-April, Ton filed a complaint with the Virginia Department of Health’s Office of Licensure and Certification. “I was hoping that you might be able to help me, as everyone else has passed the buck,” she wrote. “We don’t know what rights our son still has, and what rights we have to protect him in a pandemic.” Two months later, she says, she has received no substantive response to her complaint. The Virginia Department of Health said that Ton’s complaint isn’t being investigated because CMS in March suspended all complaint investigations that don’t involve “immediate jeopardy”—the most severe level of harm to residents.

In the weeks that followed, a few states began to recognize the most vulnerable long-term care residents’ need for visitors. In an early May letter to all health-care facilities in the state, the California Department of Public Health said that “visitors are essential for the mental health of pediatric patients” and these patients should be allowed one “support person.” In early June, the Indiana State Department of Health said that family members who previously engaged with long-term care residents at least twice a week could be designated “essential family caregivers” and allowed limited visits to loved ones in these facilities.

Most states made no such accommodations, and CMS nursing-home guidelines issued in mid-May maintain visitor restrictions until the third and final phase of reopening, when the facility has adequate staffing, protective gear, and testing, among other factors. “It could be years before that happens,” says Dark, the California attorney. “Some more manageable, reachable goals need to be implemented.”

“I’m just flabbergasted that there hasn’t been any flexibility over a period of three months” allowing parents to visit children in long-term care facilities, says Lucy Beadnell, director of advocacy at the Arc of Northern Virginia. CMS didn’t respond to requests for comment.

In mid-June, St. Mary’s sent a tentative visitation schedule to families, saying it may start allowing limited outdoor visits when Virginia has been in its third phase of reopening for a couple of weeks. Virginia is currently in Phase 2, and no start date for Phase 3 has been set. “Please remember, that at any time, this process could pause, regress, or jump ahead,” the facility wrote.

The indefinite time frame and the knowledge that the reopening process could revert to square one at any time is “alarming,” Ton says. “If I knew it was three months of separation, it would be bad but manageable,” she says. “I could at least tell my child something.”

Write to Eleanor Laise at eleanor.laise@dowjones.com